Tripawds Supporter sites have no ads!
Skip to content

Tripawds is a user-supported community. Thank you for your support!

The vet tech opened the side door, and out hopped Marley. Half of her body was shaved, and there was that awful incision – I won’t downplay it, it was incredibly tough to see it. We had a hell of a time trying to get her into the backseat and onto her bed. At 75 pounds, she isn’t a small dog, and she hates being picked up and squirms like a madwoman during any of the approximately 4 times in her entire life I have tried. My partner and the vet tech each took a front and a back and got her in. She ended up squealing quite a bit, which immediately made me feel disgusted with my decision. And helpless. So helpless. She looked confused and sad and not her usual self – all of which I knew was normal, and I was expecting it, but it was STILL tough to see. I sat in the backseat and scratched her head for the 40-minute drive back home.

Getting her out was another big problem. We didn’t want to pick her up due to the squealing previously. Her incision was incredibly high up and there didn’t seem to be any “good” spots on her body to pick her up. We gathered several couch cushions and positioned them as stairs for her. She was 0% interested in moving. She was on her dog bed so we very carefully just moved it down each “stair” until finally, it was flat on the pavement.

She hopped through to the backyard, but it was painful to watch. Again, I KNEW to not expect much, but seeing it firsthand with your own dog vs reading blogs on the Internet is much more heartwrenching. We managed to get her into the basement (her spot for healing and where she had spent the vast majority of the past 3 months given her sore body) and she laid down on the carpet. I have to admit, she looked like an adorable seal. 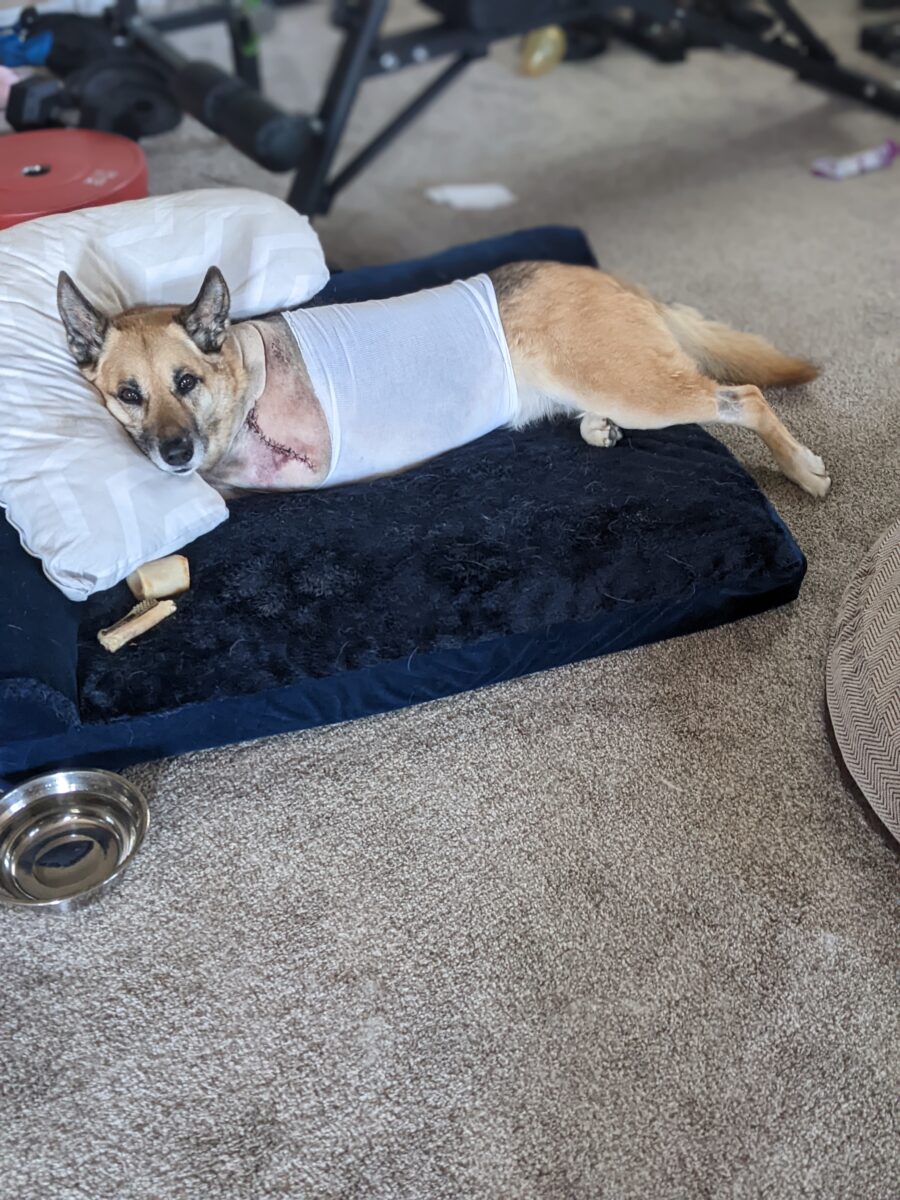 She was really sleepy (they said she didn’t really sleep much at the hospital and was very vocal / anxious) and passed out for a couple of hours. She refused to get up and peed herself a couple of times, so we put puppy pads down and decided we wouldn’t force her to get up, not on day one. She had been through enough.

The night was mostly uneventful although she did bump her stitches when she stood up to readjust herself on her bed and yelped. As I was sleeping beside her on the couch, I just tried to reassure her and give her pets. She quickly fell back asleep.


To remove ads from your site and others, upgrade to a Tripawds Supporter blog!

This site uses Akismet to reduce spam. Learn how your comment data is processed.

About Your Tripawds Blog:

New Tripawds Bloggers: Please review your default first blog post for help getting started with your blog or review the Help Videos in your dashboard. Edit these widgets from your Appearance settings to remove this notice, upload a custom header photo, or choose from 130+ themes, and much more!


Tripawds Supporter sites have no ads!